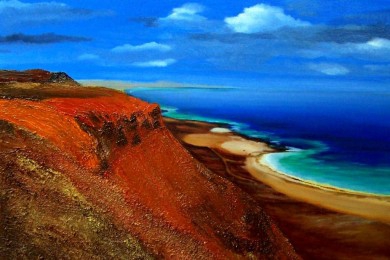 lanzaroteOne of the most beautiful landscapes in the world

Lanzarote is a unique and spectacular island. Its landscapes created by the union of the lava and the sea make up a unique “lunar landscape”, which has been the scene for the production of many films. Due to its great geological value we can highlight places such as the Natural Park of Timanfaya, in which there are more than 25 volcanoes. Inside are “Mountains of Fire” that flooded the island lava forming landscapes as attractive as the Jameos del Agua or the Cueva de los Verdes. The National Park of Timanfaya is the Natural Park of the Volcanoes.

The Volcano and the Malpais of La Corona, situated on the north of Lanzarote and the Macizo de Ajaches, in the south, are unique places in the world that only Lanzarote can offer leaving the traveller impressed. The Cueva de los Verdes located in the south of the island is also worth a visit for the tourist.

But in addition Lanzarote possesses some of the best beaches on the planet. Small coves, long sandy beaches bathed by the shores of the island unique in the world. In these waters the surf is the perfect setting for your practice.

In the north of the island we found a group of islets of great beauty called “Archipiéago Chinijo” Natural Park formed by La Graciosa, Alegranza, Montaña Clara, Roque del Este and Roque del Oeste, all of them with idyllic beaches and crystal clear waters.

All this and much more awaits you in Lanzarote.